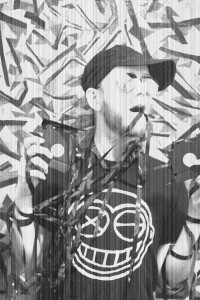 J.D. RENAUD is, despite all evidence to the contrary, a professional.

He is a visual artist and comedian, born in Oakville Ontario, currently living in Winnipeg Manitoba for some reason.

His visual artwork, which he calls ‘One Sheets’, have been attracting considerable attention from fans of abstract pop art, and have sold internationally to private collectors and professional art institutions alike. His first solo gallery show was in August of 2014. In 2015 and 2018 he was voted ‘Favourite Local Visual Artist’ the readers of The Uniter, and was the subject of the documentary short ‘Paper Cuts’ filmed for MTS Stories From Home.

As a stand up, he’s performed multiple times in the Winnipeg Comedy Festival, Oddblock Comedy Festival, and all across the country some of our nation’s finest comedy clubs and dive bars. He has appeared on CBC Radio’s DNTO and The Confessional.

He has produced six shows for the Winnipeg Fringe Theater Festival. 2013’s ‘Self-Destructivism’ was nominated for the Harry S. Rintoul play-writing award. 2014’s ‘Damn Your Eyes’ earned five stars from the CBC, and was voted ‘Favourite Local Theatrical Production Of The Year’ by the readers of The Uniter. 2016’s ‘My Dreams Are Stupid’ and 2017’s ‘Story Hole’ both played to sold out shows throughout their run, but they only got four stars. Still pretty good. Now his live shows are just called ‘The Placeholder Show’, because he stopped trying to come up with new titles.

He ruins things for a living.

ART SHOWS I DONE DID DO…

That’s It, back to Winnipeg Two – Group Show Curator and Contributor – Winnipeg – 2020

Something Bazaar – Organizer and Vendor – 2019

That’s It, Back To Winnipeg – Group Show Curator and Contributor – 2017

My Dreams Are Stupid – Winnipeg Fringe 2016